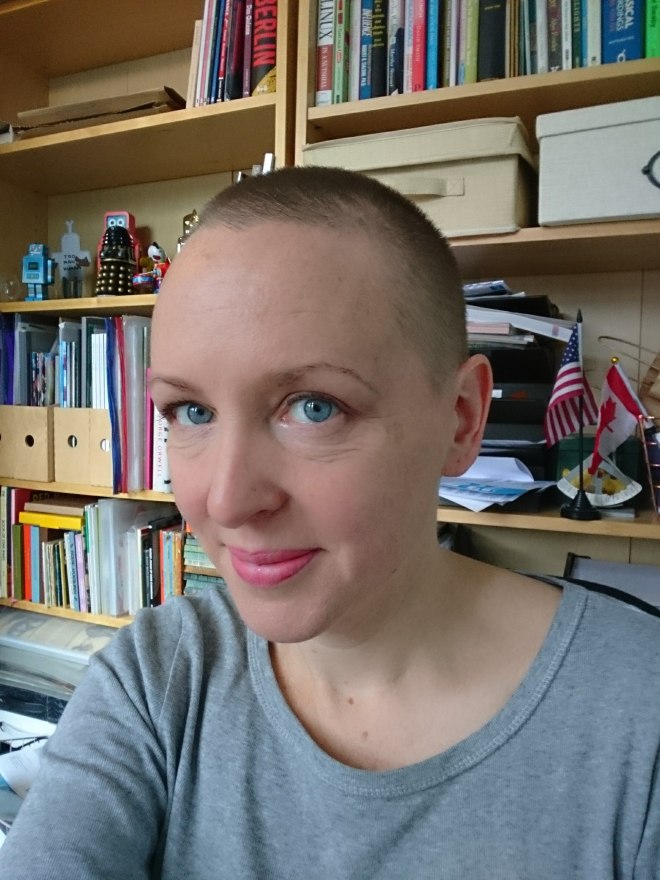 “You’ll be fine, she’s really good!” That’s what the owner of the hair salon told me about the new hairdresser they’d got to replace Daisy.

I loved Daisy. Daisy was awesome. She was the only hairdresser I’d ever met who knew how to cut fine hair, and make me look chic, rather than the sort of woman who demands to speak to the manager.

But I took the salon owner’s word for it about Daisy’s replacement, and gleefully turned up for my appointment.

“It needs to be more layered at the front.”

By this time I was thinking sod this, I’ve been here forever and I need to pick the kids up. So in that typically British way I said “Yeah, it’s fine” when she finished, secretly itching to take a pair of scissors and finish the job off myself (the haircut, not stabbing her with them, although that did cross my mind).

But I didn’t, of course. I let it grow out a bit until it looked worse, until one day I saw an ad on the telly for Macmillan’s “Brave the Shave” campaign.

Macmillan is a well-known cancer charity in the UK. They provide support to people with cancer – anything from useful leaflets in the doctor’s office, to helping people with money, to specialist cancer nurses who will look after people in their own homes at the end of their lives. These nurses are brilliant, apparently, but then most nurses are.

Of course, none of this comes cheap, and that’s why Macmillan regularly have national fundraisers. The coffee morning is one, some people run marathons and some people “Brave the Shave” – getting people to sponsor them to have their head shaved.

When I saw the ad, I realised it was an interesting, if rather dramatic, way to deal with my unfortunate haircut, as well as to raise money for a very worthy cause. Also, I have ADHD so I need constant stimulation, and shaving one’s head is cheaper and healthier than a drug, gambling or fine cheese habit.

But it was just one of those things I added to my enormous and ever-growing “to do” list, along with the important stuff like running my business, starting a new business, writing a book, building an extension to my house, making sure the children don’t turn feral, and battling existential dread.

Most people use their “to do” lists as a way of actually, y’know, doing stuff, but I kind of used mine to avoid it. If I wrote something down, it felt like I’d dealt with it, even when I hadn’t. I normally lost my “to do” lists eventually anyway. So when I wrote “Brave the Shave” on my “to do” list, at the back of my mind, I thought it would never really happen.

But I hadn’t reckoned with Focusmate.

Focusmate is a simple and effective web app that pairs you with an accountability partner. The partner is a real person – someone who, like you, needs the presence of an extra person in order to get stuff done. You check in at the beginning (yes, you’re on camera, that’s really important), tell each other what you’re planning to do, then check back in at the end to see if you really did do it. Then you close the session and spend the next ten minutes wondering why you look so terrible on a webcam. Simple, and highly effective.

I read about the concept of accountability on one of the ADHD sites. I had noticed that I actually did what I said I would when I had an appointment with someone – usually a call with a client – and I figured that using an accountability partner could work well for me. And I was right!

There’s something weird about having an accountability partner. It kind of makes you accountable to yourself. There’s nothing to stop you from disappearing down a Pinterest hole for the entire session, or telling your partner you’re going to sort out a boring database but then writing a much more fun blog post.

But the honour system is very powerful – as is the commitment to someone else. If you’re late or you don’t turn up, you’re messing up the session for your partner. Some people don’t give a crap, but for most people, that’s an incredibly powerful motivator. Especially for people with ADHD who have rejection-sensitive dysphoria. RSD is a common symptom of ADHD – if you can’t be bothered to look it up, it basically means you can’t bear to let anyone down. Which is one reason having an accountability partner is so powerful.

Anyway, back to me and my hair. By the time I’d seen the “Brave the Shave” ad, I’d already used Focusmate sessions to sort out not only my “to do” lists but also my schedule, meaning all the stuff on my lists got put onto my schedule so I’d actually get to it at an assigned day and time. I was actually getting through my mammoth list of tasks!

So one day, I signed up. Didn’t take long. I didn’t do anything else for a couple of weeks until another Focusmate session during which I scheduled my shave, set up my fundraising page properly, and told everyone I knew. So I couldn’t back out!

Come the day of the shave, I washed my hair, put on a ton of make-up, grabbed my family and walked to my local barber shop – Kevin the barber had offered to do it for free. I think he was quite excited about it actually! I live streamed the whole thing on Facebook, including the kids’ total lack of interest, and I was done.

Now I look like Sinead O’Connor – not the young, pretty version unfortunately, but the middle-aged crazy one. Weirdly though, I have never received so many compliments. This is what friends and family have said about me and my bald head:

“It really suits you.”

“You are an inspiration.”

Out of the mouths of babes, eh?

Anyway, I quite like my new look, and I raised over £1,000 for a very worthwhile cause – more than doubling my original target of £500. I’m saving a ton of time every morning by not having to wash my hair, and I’m looking forward to trying lots of fun new styles as it grows back. Possibly not a 90s-style undercut though.

So there you go, that’s how Focusmate made me lose all my hair. I highly recommend you try Focusmate as it’s free, it’s very effective for a lot of people, and it’s a wonderful community. And it (probably) won’t make you go bald.

One thought on “How a web app made me go bald”